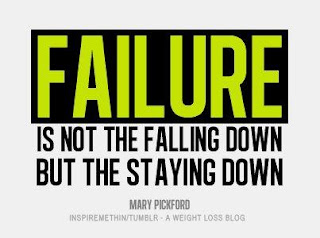 I heard an empowering and moving word on Sunday, August 26th at my church home. My Pastors (I have two Pastors) were on vacation but would be happy to know that Rev. Harold Hayes took care of their flock with his amazing message. The sermon title was, "Failure Is Not Final."

His sermon title hit home for me in one area of my life. I had been dwelling on something for years and even before my mother's transition she told me, "You're not a failure."

I was going to write about what I felt earlier in the week but I'm glad I didn't because I heard one of my favorite gospel artists on the radio talk about her struggles. Vicki Yohe was on the Cory Condrey show and she said how her publicist told her, "You're too transparent, you need to be more private about your life and what you have gone through."

She said, "I can't do that, people need to know what I've been through so they know that it's not just them. That folks like me have struggles too."

I feel like her and some people have made comments about my transparency but I can't help it. I don't put everything out there but what I feel needs to be brought to light so others can relate and know they are not alone. When I do spoken word I talk to the crowd in between pieces so they know what I was thinking...going through and what brought me to writing about that subject. When someone thanks me I know that my ministry (which is my writing) has taken effect.

The word that Sunday struck me because Rev. Hayes said, "FAILURE IS NOT FINAL." Buckets of tears streamed down my face and when I saw people flocking to the alter because they wanted to be released of that feeling of being a failure I knew I wasn't alone. I too went to the alter and got on my knees and just let it out. All of the emotions over the years was being expunged from my spirit.

The one thing I tell people is that I have to take time and reflect on me...yes me. What can I do so I won't feel like this any more and I need to heal over the years of pain and hurt in order for God to send that individual to me that will be my husband and I to him.

Rev. Hayes said, "Failure is a refining process...it's like the passage about the potter. He could have used a different piece of clay but he kept reshaping and remolding the same piece."

I am that piece of clay, yes I have cracks in me and needed at many times to be remolded. I was that shattered jar at one point of time but instead of feeling destroyed years ago through emotions and ill mental thoughts of a broken relationship God reshaped me and has kept His hands on me ever since.

I had to share this because I walked out of church feeling a sense of renewal. I still have work to do and need to totally believe that I'm not a failure...but I know that I'm being refined, reshaped and molded like the lump of clay on a potter's wheel and in time I will be able to look back and reflect on what I thought was a failure and note it as a process that God put me through.

Not only am I being refined but I'm learning to listen to Him even more so I won't make the same mistakes again.

May peace be with you and I hope someone can learn from my story and look within and be honest with themselves so they too know that they are being refined and are not failures.
Posted by Serena W. at 5:11 PM 1 comment: